9 Fox Facts You May Not Know

Recently, fox sightings have been on the rise in the Carolinas, which means you may have spotted a few of these bushy-tailed animals trotting around your yard.  If that’s the case, you may be interested to learn these nine fox facts. Foxes are fascinating creatures but can be a danger to you and your home, so it’s important to understand what you’re dealing with. In this blog, you’ll learn the fox facts you may not know as well as ways to protect your home against fox invaders.

Similar to cats, foxes are nocturnal. Due to their vertically slanted pupils, they have increased visibility in dim light. Foxes also climb trees, use their whiskers to navigate and even stalk their prey like cats. Grey foxes can retract their claws, too — just like cats.  Grey foxes also more closely resemble cats, while red foxes have a similar appearance to dogs. Additionally, male foxes are called dogs while female foxes are called vixens. Foxes even tread like cats, using the balls of their feet to silently and elegantly stride.

Fox families, also known as a skulk or leash of foxes, live in underground dens. When the vixen has her pups — a litter of foxes can range between one and 11 pups — they live in the den together for seven months while the pups grow. The pups live in the den with the vixen, while the dog fox gathers food.  These underground dens also provide shelter from predators, such as coyotes, wolves, and bears. Humans, however, pose the largest threat to foxes. While no homeowner wants foxes meandering around their property, there are safe ways to remove them without harming or killing them.   Related: DIY Home Wildlife Removal: Dead or Alive

Yep, foxes stink. They have a sickly, musty scent that comes from the glands at the base of their tails. If you start smelling this around your home or in your crawl space, it may be an indicator that foxes are near. Click here to learn how to sniff out and identify other pest odors around your home.

What does the fox say? As it turns out, foxes can produce a variety of sounds — up to 40 to be exact. The most noticeable is their scream-like howl, which is sure to send a shiver up your spine.  Gekkering, a series of guttural chattering, is also the most common noises made by foxes, especially in a dispute. Foxes, specifically red foxes, are highly territorial. In the event another fox intrudes into its territory, foxes are likely to chatter loudly back and forth in defense of their home. Watch this video to hear a variety of red fox chatters.

Unlike their coyote and canine relatives, foxes are solitary creatures. They prefer to hunt and sleep alone, except when they’re busy raising their young in their den.

It’s reported that red foxes can hear a watch ticking from 40 yards away! Their impeccable hearing helps them to identify prey underground. What’s even more interesting is that foxes use the Earth’s magnetic field to locate their prey. That, in combination with their sensitive hearing, makes them pretty fierce predators. Watch a red fox catch a mouse in the snow, here.

Foxes love to play. They’re even known to steal golf balls from golf courses to play with! Foxes play alone, with other foxes and other animals — even deer! If anything, it makes for some adorable backyard entertainment.

8. There are two types of foxes in the Carolinas

While there are a variety of fox species all over the world, only two call the Carolinas home: the red fox and the grey fox.  Red fox: 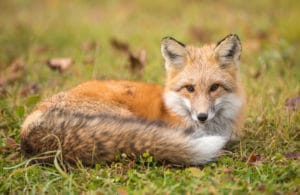 Red foxes can be red, grey, black or even white. However, they’re most commonly red. Some key identifiers of a red fox are its black legs, black-tipped ears, white-tipped tail, and dog-like face. They can grow up to 20 inches in height and weigh up to 35 pounds as an adult.  Grey fox: 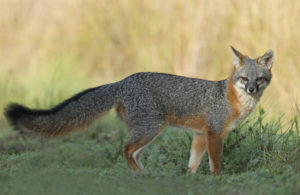 Grey foxes can also be different colors, such as red, grey or brown. The grey fox has a black-tipped tail and a dark stripe down its back. It also has a more cat-like face than the red fox. Grey foxes are much smaller than red foxes, too. As an adult, they are typically two feet in length and weigh less than nine pounds.  Grey foxes have always been indigenous to the Carolinas, unlike red foxes that were introduced to the area from Europe for hunting purposes.

9. It is illegal to relocate foxes in North Carolina

This is by far one of the most important fox facts on this list. Relocating foxes is illegal in North Carolina, which is why it’s always in your best interest to contact a wildlife control specialist before attempting to remove a fox from your property.

How To Protect Your Home Against Foxes

Now that you know the fox facts, let’s discuss ways to protect your home against these bushy-tailed fox invaders.  If you find your efforts aren’t working how you’d hoped, contact the team at Killingsworth to locate the foxes and successfully deter them from your property and home. With over 26 years of experience, we know a thing or two about wildlife control!

Schedule an appointment with our wildlife control experts today!

Get a free quote

If you have questions about our services, plans, or pricing we are here for you. Fill out the form below and we will communicate with you by email (and of course provide you with a free estimate).